Look Back Over Our League 1 Season

Montrose celebrated the club’s 140th anniversary with a sixth consecutive victory.
On a cold and occasionally wet afternoon, the home side were the better team throughout, coming off the back of an impressive unbeaten run.

They were the first to threaten the opposition, Blair Lyons cutting inside from the left before shooting straight at visiting goalkeeper Marc McCallum.

Lyons’ close control continued to torment Forfar, the forward having a shot palmed over the crossbar after a mazy dribble in the 32nd minute. From the corner that followed, Liam Callaghan poked the pole to the feet of BLAIR LYONS, who hammered his shot into the net.

Forfar came close to equalising four minutes later, but Callum Tapping could only shoot wide from the edge of the box.

At the other end, Martin Rennie had a shot from the edge of the box deflected wide, and Webster turned his marker before shooting over.

The dying minutes of the first half saw Rennie twice head over the bar, once from a Liam Callaghan cross and then from Webster’s resultant corner.

Montrose doubled their lead almost immediately after the restart. Graham Webster’s free kick into the Forfar box was headed past his own goalkeeper by visiting defender DARREN WHYTE, under pressure from Sean Dillon.

Webster, the Ladbrokes League 1 player of the month for October, looked to continue his impressive scoring run, but could only fire over from the edge of the box in the 51st minute.

Forfar’s best chance of the second half saw Dale Hilson break free from his marker and bear down on Aaron Lennox, but his attempt at a cute lob went awry, and the ball flew harmlessly wide of the post.

Visiting substitute Ross Forbes had a shot held by Lennox on the hour mark, and Webster was denied by the post from a free kick nine minutes later.

Montrose completed the scoring in the 81st minute, Forfar’s Scott Robertson passing the ball straight to the feet of substitute SHAUN STRUTHERS, who jinked into the box and dispatched a shot beyond the helpless McCallum.

Webster again tried his luck from a free kick in the 85th minute, shooting over, and a Cammy Ballantyne mazy run ended with a shot over the bar in stoppage time. 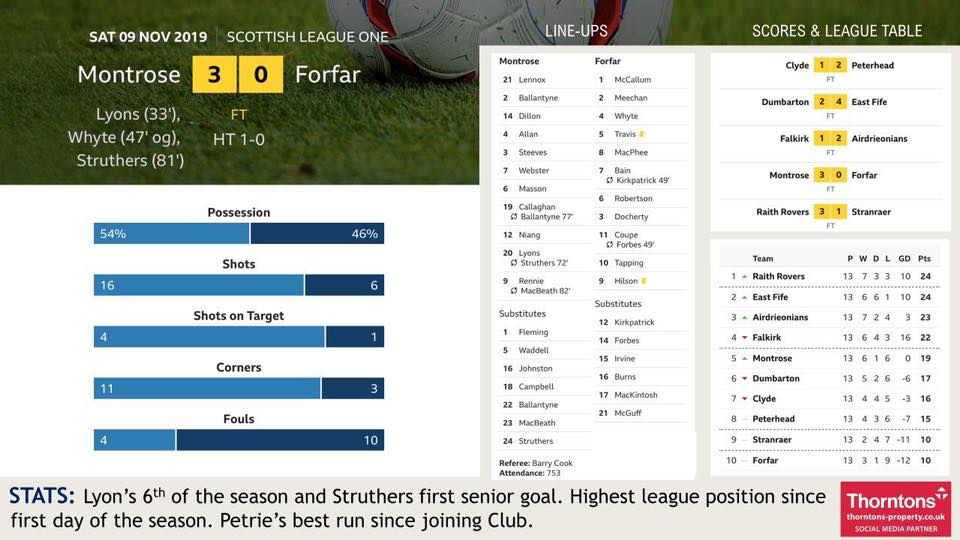