Manager Stewart Petrie had the luxury once again of having a settled squad for this game at Airdrie as Montrose looked to make it three wins on the bounce and edge away from the bottom two in League 1. The crowd of 642 was boosted by a good Montrose away support who were very noisy as usual.

Referee Graham Beaton got the game underway and Steeves broke up the first Airdrie attack with a long ball downfield but out of reach of a Montrose attacker. Back came Airdrie and what turned out to be their best threat was their long throw in specialist. The first goal came from just that as Montrose failed to deal with it the first time and also failed to attack the second ball which was hooked in comfortably by CALLUM SMITH in the 3rd minute to make it 1-0.

At that point Montrose were yet to have possession of the ball in the opposition half. After the set back things fortunately changed and Montrose gained more possession and became a real threat going forward. Webster had the better of his defender throughout the game and with wing back Ballantyne linking with him it became all too much for the home side.

Lyons was first to show a threat on the left however as he weaved his way along the goal line but his shot from a tight angle was gathered by keeper Willison. Watson then tried his luck from 30 yards, but it was deflected for a corner which came to nothing except two more corners which also went a-begging.

The impressive Webster then opened up the Airdrie defence when he turned his man but his shot was also saved by Willison. Another Cammy – Webster- MacBeath move almost brought the equaliser but again Willison came to the Airdrie rescue. Would Montrose capitalise on this spell of pressure or make a mistake at the back? The answer came from young BLAIR LYONS who gathered the ball wide left then worked his way across the edge of the 18 yard box before hitting a rocket shot past Willison to make it 1-1 in the 16th minute and deservedly so.

Montrose were still being troubled by long throw ins at the other end but equally were having the better of the play and looked the better side especially down both attacking flanks. Another surge down the right by Cammy then Webster saw the latter swing the ball across field to Lyons who beat his man again and his shot come cross fell right for GRAHAM WEBSTER to tap it in to make in 2-1 to Montrose in the 31st minute.

Cue Airdrie pressure as they found themselves behind and a mix up in the Montrose defence almost let them in but the ball bobbled out for a corner which was overhit. Back at the other end Montrose won a corner and Callaghan agonisingly saw his volley just clear the angle of post and crossbar. Half time came with Montrose leading 2-1 but with the long throw in problem to sort out in the dressing room.

As the second half started Lennox had to move smartly to cut out a long ball as Smith burst through. From his clearance Lyons used his speed to break through the middle but was taken out as the Airdrie lad received the first yellow card of the day. Airdrie up to the hour mark looked the livelier side in the second half but with no great threat up top although

As Airdrie tried everything to break down Sean Dillon’s back line Montrose had a spell when they just couldn’t get the ball away and it was finally ended by a welcome offside flag. Johnston then used his pace and let fly with a rocket which cleared the bar. Another Airdrie substitution brought Roberts on for McKay after 70 minutes but by now Montrose had weathered the second half Airdrie pressure and regained the upperhand. Steeves hit a 30 yarder which disappeared into a large empty stand behind the goals. Then Webster worked his way from the right-hand corner flag and his low cross led to a scramble in the 6-yard box until it was hooked clear.

Wedderburn saw yellow for Airdrie for fouling Webster twice within seconds of each other as two yellow cards were dished out to Montrose, firstly to Dillon for a foul on the edge of the box and secondly to Lennox for time wasting although it did seem he thought it was a free kick rather than a goal kick.

Just as it looked like Montrose were playing out time for a 2-1 victory Johnston skinned his man down the right and crossed low for BLAIR LYONS to notch his second goal of the day to make it a 3-1 win instead. Although the cross went behind him he swivelled and hit a lovely volley into the net from close range.

A thoroughly deserved win for Montrose and next week they return to Links Park and welcome Stranraer. 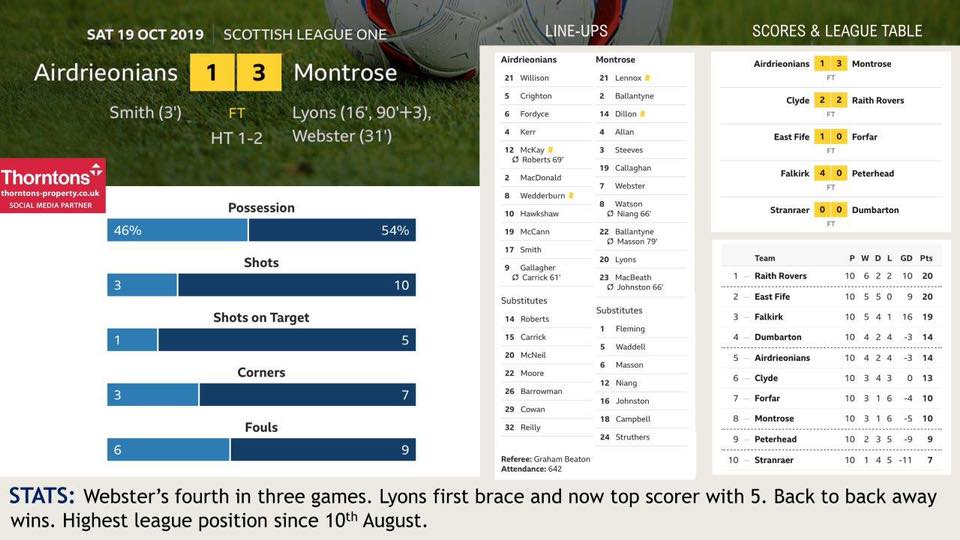