There was a good sized Montrose support in a great League 1 crowd of 3,736 at the Falkirk Stadium on a dry but breezy day. Montrose made changes after Tuesday, some of which were enforced and as this game unfolded they were about to lose two more key players to injury.
They lined up with Fleming, Ballantyne, Steeves, Dillon, Waddell, Lyons, Webster, Watson, Skelly, Cregg and Milne. Only five were on the bench, Lennox, Allan, Iain Campbell, Rennie and McLean. No Masson, Callaghan or Ross Campbell on the day. Referee was Steven Reid.

It was an uneventful first few minutes as Falkirk probed the Montrose defence and in return Montrose used the long ball down the flanks to get Skelly up and running. Attacks at both ends fizzled out until Webster looked dangerous down the right but his cross from near the corner flag swung out of play for a goal kick. Falkirk then had a period of pressure but twice crosses were wasted, one being hit too hard and the other well hit but no takers in the six yard box. Then another half chance for Montrose as a Milne free kick was almost swept in by Watson. It was Watson who incurred the wrath of the massed home fans with two quick crunching tackles although referee Reid deemed neither worthy of a yellow card.

Montrose weathered the first 15 minutes a bit under the cosh at times then a great through ball by Milne sent JOSH SKELLY away down the left and he smartly drew keeper Bell before drilling a low shot past him to make it 1-0 to the Mo. A well worked counter attack.

Cue Falkirk pressure after their set back but the lively Skelly almost got on the end of another Milne cut back but a defender deflected it away. The equalising goal came on 31 minutes as a ball down the left found its way into the six yard box for CONOR SAMMON to notch his first goal of the game at close range. Soon after Montrose gave the ball away in midfield and were fortunate the end shot went wide of target. In challenging however Paul Watson fell awkwardly and had to be substituted in the 42nd minute by Matty Allan. The shuffled Montrose side held out until half-time at 1-1 although on the stroke of half-time Cammy Ballantyne saved the day as Conor Sammon was about to pull the trigger.

Montrose started the second half by winning two quick corners the first of which was too long and the second was wasted as well. Then a disastrous spell for Montrose. Firstly Andrew Steeves fell awkwardly on the far touchline and received treatment. Meanwhile play continued and Falkirk should have done better when an unchallenged header inside the six yard box flew over the top. After 53 minutes Steeves was unable to continue with what looked like a rib injury and was substituted by Iain Campbell who slotted into the left back position but Montrose lost the Steeves attacking threat down the left. Then another blow for Montrose as keeper Allan Fleming fielded a harmless cross and looked to throw the ball out to the right. In doing so however he was too close to CONOR SAMMON who the ball hit and rebounded into the net. It could have gone anywhere but the puzzled referee and linesman both signalled a goal which is exactly what it was.

At 2-1 to Falkirk after 56 minutes you wondered if the Montrose resistance might fail but credit to them it did not even with two key players off injured. Stewart Petrie pushed Ballantyne forward with Webster covering at right back. Both received yellow cards in quick succession one for a late tackle and in Webster’s case for not managing to get out of the lad’s way as he tried to get past. Mclean came on for the tiring Skelly on 65 minutes as Falkirk responded with Connolly and McShane off replaced by Longridge and Gomis.

Falkirk looked to close the game with a succession of four corners but Montrose did not lie down. Waddell was sent up top to centre forward to join McLean and with Ballantyne pushing in from midfield they were certainly trying everything for an equaliser. Buchannan for Falkirk saw yellow for a desperate late tackle then McLean for Montrose was also booked.

Finally Montrose ran out of time and Falkirk collected all three points with a 2-1 win. It was a dogged performance by Montrose against the fancied Falkirk side and if a goal threat can find its way into the side they will beat lesser teams than Falkirk. ‘If’ is a big word however but credit to the lads today who stuck to their task despite unfortunate injury set backs. 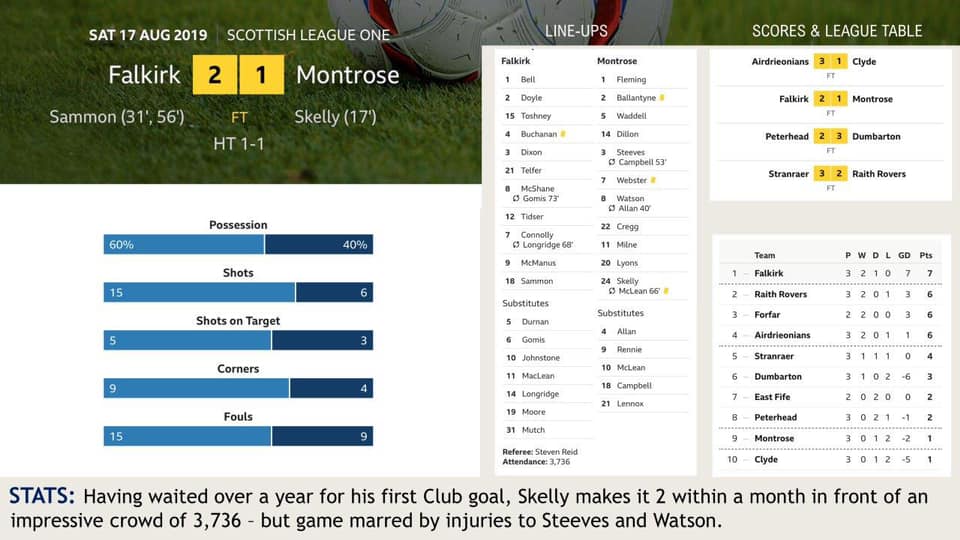