Look Back Over Our League 1 Season

Montrose suffered a third straight defeat, losing to in-form Dumbarton on a cold and blustery afternoon.

The home side had been the first to seriously test the opposing goalkeeper, Andrew Steeves having a shot parried and held at the second attempt by Grant Adam.

But Dumbarton took the lead in the 17th minute when Sean Dillon slipped, allowing DOM THOMAS to progress into the box. His first shot was blocked by Allan Fleming, but the ball spun up, allowing Thomas to poke into the net from a yard out.

Montrose were given an almost immediate opportunity to equalise, when Craig Barr tripped Chris Antoniazzi in the box. Martin Rennie stepped up to take the penalty, but he crashed his spot kick onto Adam’s crossbar, the ball rebounding up and out for a goal kick.

Much of the remainder of the first half passed without incident, Lewis Milne shooting wide of the post from the edge of the box as close as Montrose came to finding an equaliser.

They were left to rue the miss three minutes later when former Montrose fullback Cammy Ballantyne slipped the ball across the box to the unmarked CALUM GALLAGHER, who knocked the ball into Fleming’s goal at the near post.

Montrose came flying out for the second half, and had pulled a goal back within five minutes of the restart. A short corner was played out to Iain Campbell, who curled a cross into the box for SEÁN DILLON to head across Adam’s goal and into the net.

The Gable Endies piled forward in search of an equaliser, Steeves bursting into the box and sending the ball across goal, but Rennie could only send his shot wide of the post at full stretch.

Iain Campbell hit the target with a free kick from the edge of the box in the 57th minute, but Adam easily held the ball.

Disaster struck for Montrose two minutes later when Fleming’s clearance into the wind looped back into the box, causing chaos in the Montrose backline and enabling DOM THOMAS to collect the ball and fire home.

Antoniazzi had a weak shot easily held by Adam in the 67th minute, while Lewis Milne hit the target with a free kick two minutes later, but Adam parried the shot and held it at the second attempt.

Milne tried his luck again a minute later, but shot wide from the edge of the box, while Dumbarton’s Dominic Thomas passed up a chance of a hat-trick when he shot high and wide from 25 yards out.

The final clear-cut chance of the match fell to Thomas, who forced Fleming into a good save with a stinging shot. 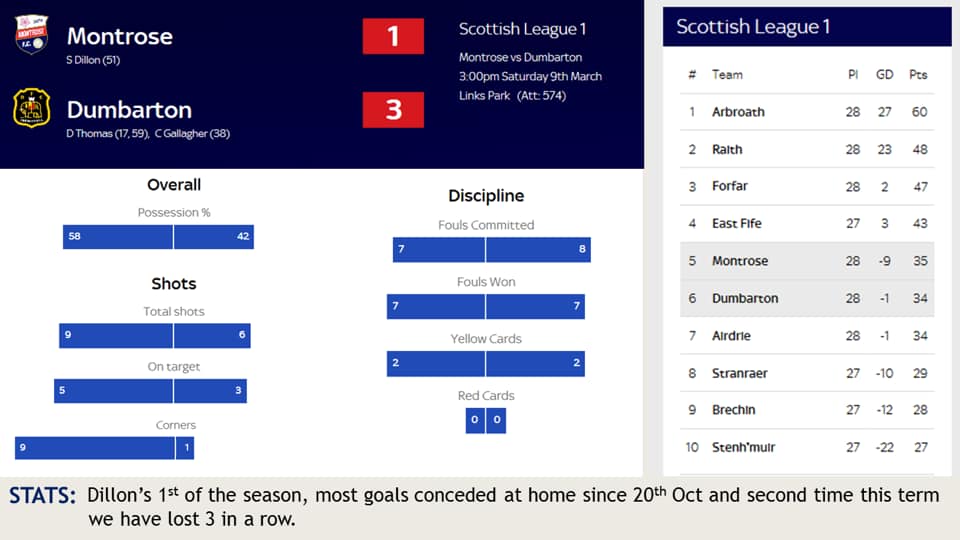