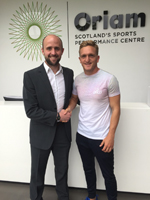 Montrose FC have signed ex-Cowdenbeath defender Dean Brett on a 1 year deal, bringing, in the eyes of the Gable Endies boss, one of the best right backs in the league to Links Park.

Stewart Petrie said, “This is fantastic news for us and I am delighted Dean has agreed to join. He has had a difficult last couple of years personally, but his ability on the park has never been in question and I consider him one of the best right backs in our division.”

Edinburgh born Brett began his career at Cowdenbeath in 2009 and played 149 games for The Blue Brazil, scoring 9  goals.

However, in February this year the Central Park side sacked Dean after he was found guilty by the SFA of gambling on football matches.

The 24 year old admitted to having a long term gambling addiction, made worse during a traumatic few years in his personal life, with his 22-year-old wife having died of cancer in January 2015, four months after their daughter Mollie, who was born prematurely, had died.

Since leaving Cowdenbeath, the defender has been receiving professional help and played out the remainder of the season with Junior outfit Bonnyrigg Ross Athletic.

Petrie added, “Dean knows what he did in the past was wrong. He has accepted his punishment, is receiving help for his problems and I am more than happy to give the boy a second chance.”

This brings the Montrose squad for next season to 17 and the Gable Endies gaffer says he is still looking to add one or two more names to the list before too long.