MFC Nostalgia Day Set To Be A Big Hit

When Clyde visit the Gable Endies a week on Saturday a few familiar faces will also be returning to Links Park for the Club’s first ever Nostalgia Day. Fans will get the chance to enjoy an informal buffet lunch with a number of former players including Les Barr, Dennis D’Arcy, Brian Third, Martin Allan, Hugh Davidson, Kevin Tindal and making a special trip all the way from Holland is legend Ivo Den Bieman. Current Club Captain Paul Watson will also be around on the day to chat to supporters as injury is set to keep him sidelined for a few weeks yet.

Club Chairman Derek Sim said, “It will be great welcoming all our former players back to Links Park and I hope all the fans who are joining us in hospitality will have a great day mingling and chatting to their heroes from the past. We have had a lot of interest so far but limited spaces still remain.”

Montrose Youth 10's enjoyed a great day out at Links Park on Saturday with a special Hospitality package. Both kids and parents were treated to a pre-match meal before taking their seats in the stand to watch the first half.

At half time the kids got the chance to take the field and a goal challenge was set with players in turn given 6 seconds from 25 yards to attack the goal and try and score.

During the second half the boys had the job of selecting their Man of the Match and after the game they got the chance to meet the Montrose players and collect autographs.

Pictured right is Montrose Youth 10's Manager presenting Ryan Ferguson with his Man of the Match award, one that was chosen by the boys. 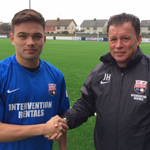 Montrose FC have secured the services of St Johnstone youngster Aaron Comrie on loan until the end of the season.

The 18 year old right back was initially signed on a short term emergency loan in December to help Manager Paul Hegarty cope with a number of key players being out injured.

Thrown straight into the first team, Aaron made his debut on December 15th against Annan at Links Park and helped the Mighty Mo earn their first point in six games.

Having played in every game since, the Saints full back went one better last Saturday when, playing in a re-shuffled midfield he popped up six minutes from time to score the winner against East Stirling.

Picking up the ball wide right, he cut inside and from the edge of the box curled a left foot effort into the far away top corner, leaving the keeper helpless and earning the Gable Endies their 900th win in SFL/SPFL history.

Assistant Manager John Holt congratulated Aaron on his loan extension and said he was delighted with how well the youngster had settled in and looked forward to seeing him develop even further over the coming months.

Jordan Reoch has re-signed for Montrose Roselea after only 6 months with the Mighty Mo.

When Manager Paul Hegarty settled on Matty Allan and Greg Pascazio as his preferred centre back pairing, Jordan found it difficult to force his way back into the team.

Club Chairman Derek Sim said, “We wish Jordan all the best on his return to Roselea. In the circumstances it is probably best for both parties. It may not have worked out on this occasion but we will continue to work closely with Roselea to monitor and develop emerging talent from the local junior ranks.”

Last weekend was an emotional one for Scott Johnston, who played his final game for Montrose FC after 4 great years at Links Park.

Scott joined the Club from East Stirling in 2011 and made 172 first team appearances scoring 17 goals, one of which was in the historic Pyramid Play Off victory against Brora Rangers back in May.

Renowned for his effort, commitment and determination, Scott has played in almost every position over the years with the only exceptions being centre half and goalkeeper.

A new life beckons for Scott now in London where he recently started a new job. Such is his dedication, for the last few weeks he has been commuting every weekend from down south to help the team out until the transfer window opened.

Manager Paul Hegarty described Scott as a great pro and said he would be sorely missed.

On presenting Scott with his farewell gifts Club Chairman Derek Sim thanked him for his years of service and wished him every success for the future.

Adrian Mallagaray, Sandy Wood and Adam Harwood have all extended their contracts with Montrose FC until the end of the season.

After a quiet start to his career with the Mo, Mallagaray has now made 14 first team appearances and the Spaniard has also netted twice, most recently at home against Stirling Albion.

Goalkeeper Wood initially returned to the Club as short term injury cover but with backup keeper Ross Salmon off to Buckie Thistle, manager Paul Hegarty was keen to extend the popular stoppers stay at Links Park.

Defender Harwood has made 8 appearances since singing a permanent deal in October. The youngster is in his second spell with the Club having made a dozen appearances last season when on loan from Dundee United.

Manager Hegarty has also confirmed that Gavin Malin has decided to return to Forfar Athletic, following the end of his half season loan deal.