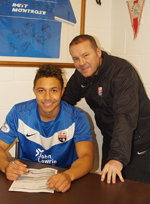 Montrose manager George Shields has completed the signing of 21 year old forward Leighton McIntosh who returns to the club for a second spell after being released by Dundee in the summer.

Leighton originally made 29 appearances for the club in season 2012/13 whilst on loan from Dundee.

He returned to Dens Park in 2013/14 and made a further 2 appearances before joining Arbroath for a loan spell at the end of the season scoring twice in eight appearances at Gayfield.

In the summer Paul Hartley let the striker leave the club and Leighton has been looking for a club since then.